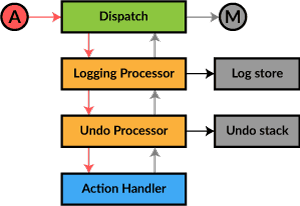 Sometimes you need to add a new aspect to action processing requiring access to all dispatched actions. Diode provides an extension mechanism to get in between dispatching an action and handling it. These action processors may do whatever they want with the incoming action, such as logging, modifying or cancelling them. The processors can also intercept the return value from the action handler to, for example, capture the modified model into an undo stack.

To define an action processor, create a class extending the ActionProcessor[M] trait and override the process function.

Add it to the processing chain with addProcessor

Later you can remove a processor if you don't need it anymore.

In order for your application to utilize RAF you need to update model in the RAF callback and do so for all animations that are currently running. A convenient way to achieve this is to use a batching action processor that collects dispatched animation actions into a batch and runs them later in the RAF callback.

The RAF example provides a RAFBatcher implementation that does just this. It uses a special marker trait (RAFAction) to identify which actions should be filtered out and batched. When such an action is encountered, it's wrapped inside a RAFWrapper and added to the current batch. If not already done, a RAF callback is requested. When the callback is executed, all batched actions are dispatched and unwrapped when they enter the RAFBatcher's process function. The processor also dispatches a special RAFTimeStamp action containing accurate time for the animation actions. Within your Circuit you should handle this action and update the model with the current timestamp.

The RAFBatcher also takes advantage of Circuit's feature of processing a sequence of actions in one go, calling listeners only after all the actions have been processed. This improves performance and guarantees correct display of animation results. If your application dispatches a lot of small actions, it may make sense to use a batching strategy even when no animations are involved.

Diode devtools project contains a convenient action processor for saving and restoring application state. This can be useful when encountering a bug in development and wanting to replicate the same application state later, after the code has been fixed and application reloaded.

The gist of the state persisting action processor is in the process function:

The TodoMVC example shows how to use PersistState action processor in an application.