In real applications you quite often have to deal with model data that is asynchronously loaded or updated. Usual approach would be to use Option[A] to indicate whether data is there or not, but then you cannot deal with error situations. Using Either[ErrorType, Option[A]] or Try[Option[A]] gives your some control over errors, but if you consider refreshing old data and getting an error back, what should the result be? Not to mention knowing how long the async operation has been running and notifying the user when it has been delayed for too long. Clearly the existing data containers are not enough for this. 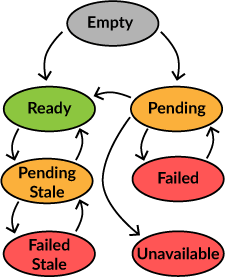 A Pot[+A] represents potential data that may exist in seven different states as seen in the picture on the right. Pot provides you with the same interface as Option or Try, making it very easy to use in your existing application code. Things like for comprehension, getOrElse or even recover are supported. Like Option, Pot is immutable and you have to create a new Pot when the state or content changes.

Pot usually starts as an Empty (option None) or Ready (option Some), depending on whether you have the data available or not. You can use the empty method to create a correctly typed Empty.

When you make an async call to fetch data, change the state to Pending with the help of pending function.

Assuming you get a successful response from the server, you can change the state to Ready.

In case something went wrong, you can store the exception in the Failed state.

When you are ready to refresh your Ready data, you again call pending but this time it results in a PendingStale indicating that old data is still there to be used while new data is fetched.

In case the async call gets new results, the state goes to Ready(newData) but if something goes wrong, you'll end up with FailedStale containing the old data.

If the data you are trying to fetch does not exist, you can use Unavailable to indicate that.

You can query specific state via isX functions, or use state for matching. Note that isEmpty means there is no data in the Pot, so states Unavailable, Pending and Failed, in addition to Empty, all return true.

The pending states of Pot store a time stamp when created. You can access this through startTime, or you can directly get the duration of the operation with duration(currentTime). This is useful in an user interface, where you'll want to show an indicator if the operation is taking too long. If an operation fails and you retry it, the startTime will remain the same, giving you the total duration of the retried operations.