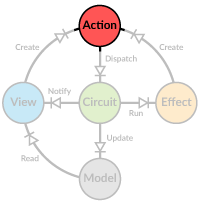 Actions hold information on how to update the model and they are the only way to make these updates. Basically the current model is a result of all previous actions, much like in event sourcing.

Actions are very much application specific but can generally be classified into global and targeted actions. A global action is something like the examples below, always changing the same part of the model.

Targeted actions, on the other hand, can change different parts of the model depending on the value of the action. For example if your data is in a tree, you would need to know what part of the tree should be changed. One option is to have unique IDs for data and search for the ID in the action handler, but typically it's more efficient and easier to use a path to the data.

If you need an action to update multiple independent parts of your model, it's usually better to break it down into several consecutive actions. This way each action handler can focus on its own part of the model and the logic is kept simple and easy to reason about. Actions are processed in the order they are dispatched, so you can be sure your sequence of actions are processed in correct order.

In Diode actions can be anything but typically case classes are used for easy pattern matching. By anything, we mean anything with a valid ActionType[A] type class in scope. Diode uses this type class to implicitly verify that the dispatched action is actually a valid action. It is up to you as the developer to decide what actions are valid by providing appropriate type class instances.

Typically a good way to accomplish this is to create a single base trait (say MyAction) for all your actions and provide an implicit ActionType[MyAction] for it in the companion object.

To make your life easier, Diode provides such a base trait (named Action) by default so you can start using it right away!

If you want to forgo type safety altogether, you can import the provided AnyAction implicit, which allows Any to be used as action. This can be used for adapting legacy Diode code to a new version.

Use ActionBatch to create a batch of actions that are dispatched in sequence without calling any model update listeners in between. This can be used as an optimization.

NoAction, as its name implies, performs no action and can be used as a result in purely side-effecting Effects.